Salesforce released their 2015 State of Sales report a few weeks ago. The report is the result of a survey of more than 2300 sales leaders from around the world. Salesforce’s goal was to unearth trends in the tools, strategies, and tactics that high-performing sales teams are deploying to stay ahead of their customers’ ever-evolving needs.

An abridged version of the report is available on SlideShare, but the full report is worth a download since some of the juiciest bits of data are actually in the appendix.

The report has a great executive summary, but there are a few threads that we found especially interesting.

Sales analytics adoption will rise significantly. The best teams are ahead of the curve. (Ahem.)

Adoption of analytics tools is expected to rise by 58%, resulting in 74% of teams employing some form of sales analytics by the end of 2016. In that end state, only CRM and activity management tools will be deployed more often.

An interesting subplot in the analytics story is that B2C sales teams are significantly less likely than B2B teams to rate their analytics capabilities highly. We’re curious about what drives this differential. One hypothesis is that B2C is more of a volume game, with teams selling higher quantities of lower dollar-value deals than their B2B counterparts. If B2C firms believe that deploying analytics adds marginal overhead on a per-deal basis, they may be less likely to adopt—perceiving the data gained to be less valuable than the cost in time and volume. 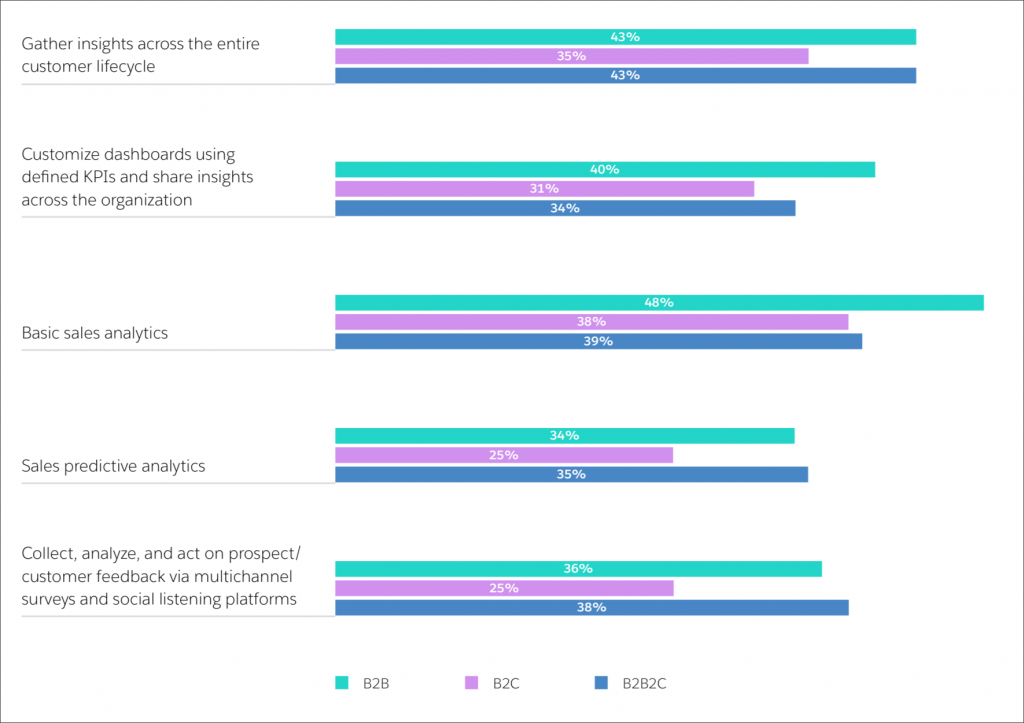 Mobile matters in Sales. And it’s going to matter more.

Salesforce’s data reflects this, but suggests that the mobile revolution may be coming to a sales team near you in the not-too-distant future. The majority of sales teams in each performance segment do not include a mobile sales app in their technology stack. That will likely change within just two years. By mid-2017, more than half of high-performing and moderate-performing sales teams plan to have a mobile sales app deployed. 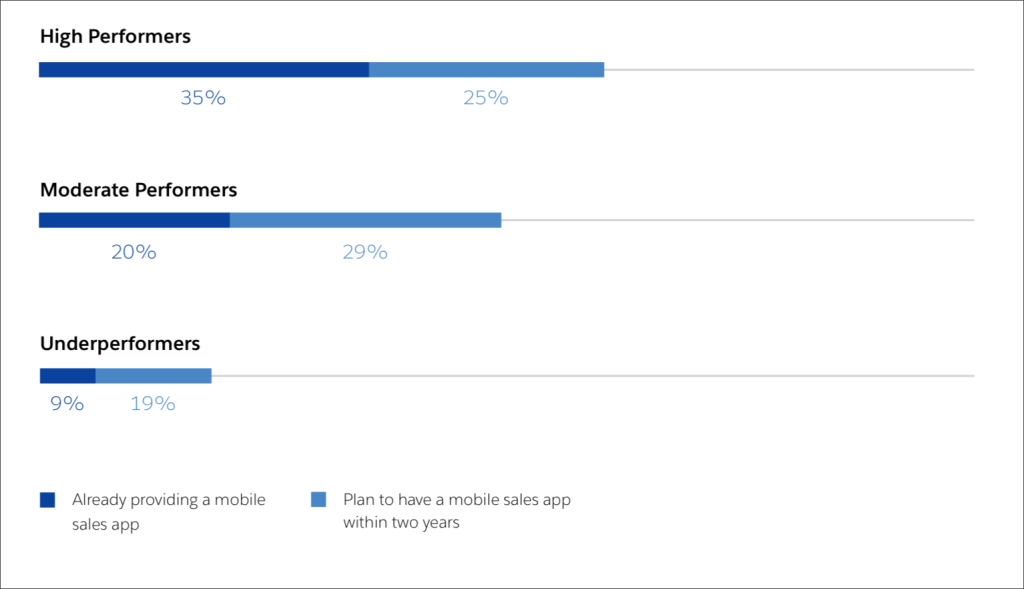 One of the most interesting, and perhaps most important, insights that can be gleaned from this data is that high-performing teams operate differently. This goes much deeper than technology adoption. High-performing teams seem to have different values both internally, and externally, than their lower-performing counterparts. This theme is present throughout the dataset, but these stats stand out:

Dare we conclude that in today’s world of well-informed buyers, hyper-competitive markets, and sophisticated technology stacks—team culture and values are the secret sauce that separate the high-performers from the laggards?

We think that it’s important to view the entire dataset through this lens, and consider correlation versus causation. For example, it might be tempting to think that adopting a mobile sales app will necessarily boost a team’s performance. After all, high-performing teams use mobile sales apps at nearly 4x the rate of underperformers. However, it’s far more likely that mobile sales app adoption amongst high-performing teams is a reflection of their higher standard of customer engagement and responsiveness. [Infographic] This isn’t your grandpa’s sales team: How the sales floor has evolved

It's no secret that the state of sales has evolved. Check out this infographic to see how sales has changed, and what your team can do to get and stay ahead.
Aug 08, 2016 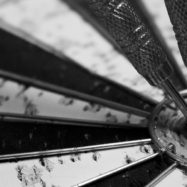 Optimize Sales and Content ROI with the DocSend for Salesforce Integration Did you know that gender diversity is linked to increased sales performance? Check out this infographic to see how diversity impacts sales.
Feb 05, 2016