Last week, our CEO, Russ Heddleston, spoke at a recent startup happy hour to share insights on how to approach planning pitch meetings with potential investors. Russ talked with Jared Verzello, former Managing Counsel at Atrium. They spent nearly an hour sharing advice on how best to prepare for your pitch meetings. Here are the top things you need to know:

“It doesn’t matter how good you are at pitching — you’re not as good as you think you are. So you should practice,” said Jared. He shared with the crowd of mostly pre-seed and seed founders that Justin Kan, the founder of Twitch, didn’t feel like he had nailed his pitch for his law-tech firm until his 80th try.

Russ followed suit by offering founders a way to work around a potential rough start when pitching. “You’re going to want to start booking meetings about two months in advance. There will always be one VC who can fit you in earlier. Resist that early meeting. If it goes poorly, VCs tend to talk amongst themselves. It could taint your later meetings and work against you.”

Rather than let one bad meeting scuttle your chances, you’re better off taking the time to hone your pitch.

You need to plan investor meetings months in advance

Booking your meetings several months out gives you the ability to put all your investor meetings in a short window to help drive a sense of urgency. It also has the added benefit of giving you time to practice your pitch. But calendar availability and driving demand aren’t the only reasons you need to plan ahead.

“Based on our fundraising research, we found the average length of time to complete a seed round is 11-15 weeks. If you’re about to run out of money, that puts you in a really terrible position to negotiate. You want to have enough runway to survive if your meetings don’t work out and you have to retool before you try again. I recommend having at least six months of runway when you start meeting with VCs,” said Russ.

“A lot of times when I ask a founder what they’re working on, they tell me just that: What they’re actually working on that week. But without the context, that actual work means nothing to me. Most people do the same thing when they pitch. They forget to give the investor context as to what the problem is they’re solving and why it’s important,” said Jared.

He even offered a quick 30-minute exercise any founder can try to perfect their pitch:

“Find someone who doesn’t know anything about your business and pitch it to them in five minutes. When you’re done, ask them what they understood from the pitch. Do the same with your problem statement, your solution, and your impact. Then put it all into a narrative by starting with ‘imagine if’. If your listener isn’t understanding, it’s because you’re not conveying the right information,” Jared said.

But the verbal pitch is only half the battle. You also need a pitch deck.

“Once you get [your pitch] boiled down to an elevator pitch that you can give your parents to explain why you’re leaving your cushy job to start a company, you’re ready to go pitch to investors. But before you can even get to them, you need to figure out how to tell that story when you’re not in the room—In your pitch deck. Turn your verbal pitch into headlines for your deck,” said Russ.

While, as a founder, it may feel like you’re going head-to-head with your potential investors to negotiate the best terms and get them to give you the most money, you’re actually on the same side.

“The relationship with your investors is actually a long-term one. The idea isn’t to be adversarial. You’re going to be spending a lot of time with them, and they will probably be on your board and offering guidance to your business as you grow. They want you to be successful. If you approach it like that, it can actually remove some of the stress from the meetings,” said Russ.

In fact, both Russ and Jared agreed that going to the mat over an extra few percentage points of ownership in your negotiations probably isn’t worth it if your long-term goals are growth and profitability.

“You can do background checks on your VCs as well. Ask other founders how they’ve helped their business, what kind of advisor they are. Taking an investment is a two-way street,” Jared said.

Charisma is a skill

One topic that came up frequently in the Q&A portion of the event was the unfair advantage people with charisma, or natural storytellers, had over everyone else when it came to pitching.

“Eliciting an emotional response by telling a story and creating a narrative is neither good nor bad. We know it works. But if you can’t do it, it doesn’t make you bad. It just means that you need to find a cofounder that has that skill, or you need to learn it,” Jared said.

And while most founders think that pitching is something you only need during your early funding round, Russ was there to offer a sobering truth.

“Pitching your business is, at its core, getting someone excited about what you’re working on and convincing them to come work on it too. You need that to run a company. Not every day in the office is going to be perfect, so you need some of that storytelling and charisma as a CEO. So don’t force yourself to learn it just for your pitch meetings. Develop it as a skill to help you run your company.” 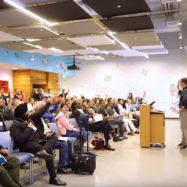 Fundraising is always difficult, but if you know how VCs are interacting with your pitch deck it doesn't have to be.
Aug 29, 2019 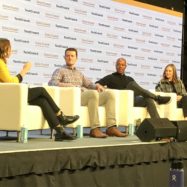 With more money flowing into earlier funding rounds, what do founders need to know to get their businesses funded.
Oct 03, 2019